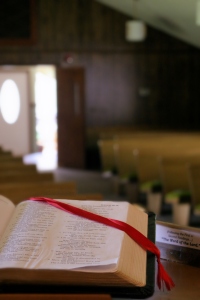 Here’s an excerpt from the October edition of The Shepherd’s Voice newsletter. We will be posting parts of the newsletter throughout the month. Don’t get the newsletter in print and want one? Send an email to shepherdofthehills@dnet.net and request one!

Ask the Pastor: What is Sirach?
A few weeks ago, our bulletin listed something from the book of Sirach as an optional text for the day. What or who is that?

Sirach is a book of the Apocrypha. The Apocrypha is a set of writings that have, at different points in the history of Christianity, been included or excluded from the official set of biblical texts. They are Hebrew writings but were probably not considered scripture by Jews (and therefore would not have been considered so by Jesus, who would have known what we call the Old Testament as the Tanakh.) Unlike most of the Old and New Testament, the authorship and validity of these texts has never been completely set and, as such, have been the source of debate amongst Christians since the earliest days of the church.
Martin Luther and other reformers determined that these texts weren’t appropriately described as authoritative but they might be good for devotional reading. In other words, we don’t study them the same way we do the other books of the bible but it is ok to have them if we wish. Occasionally, we will see books of the Apocrypha show up as optional readings in the lectionary, as happened on the first Sunday in September this year. This is because the lectionary is used by many different denominations, including Roman Catholics who consider the Apocrypha to be part of the bible.
Some of the texts in these books are interesting, such as Tobit, an exciting and dramatic story, or Susanna, sometimes called “the first detective story”. Sirach is a book of wisdom similar to Proverbs or Ecclesiastes. If you are interested in these Apocryphal books, I have a bible in my office which includes them or you can find bibles that specifically state that they include the Apocrypha.

Things that have happend, are happening and will continue to happen